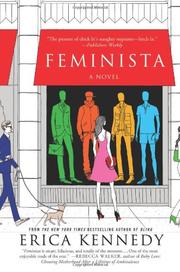 Kennedy (Bling, 2004.) tweaks the template to create a beautiful, biracial, brainy heroine, far hipper than chick-lit is used to.

Celebrity journalist Sydney Zamora is also self-centered, mostly friendless, mean, aggressive and deeply wounded (all will be explained on that last front by novel’s end). In her early 30s, Sydney decides to get serious and find a man to marry and father her children. All those artists, actors and waiters who can’t afford her lifestyle are banished from her line of vision. And thanks to a birthday gift from her sister Liz, Sydney now has New York’s premier matchmaker on her side. But while Mitzi Berman is working on a Mr. Right, Sydney is having a light fling with Max. She thinks he’s a doorman at Harvey’s, New York’s most exclusive department store, but he’s actually heir to the Harvey’s fortune, playing along with the misunderstanding. Once Max had great fun doling out “it” bags in return for blowjobs from models, but now he’s in love with Sydney and is afraid her professed contempt for elitism—which doesn’t seem to hamper her buying into its trappings—will drive her away if she learns his true status. Mitzi sends Sydney on a few disastrous dates (she’s not very nice), she loses her job (she’s not very nice), and she dumps Max (she’s still not very nice). Can this seriously flawed protagonist work it out, get her man and win her readers’ sympathy? Kennedy’s portrait of brash, abrasive Sydney is sometimes funny but more often troubling. Her aggression is blamed on her feminism, and that “problem” is solved when she acquiesces to her innate desire to be taken care of by a strong man. Sydney claims to disdain materialism, yet the novel trades in the usual consumerist fantasies of commercial women’s fiction.

For all the trash talking and politicizing, in essence as frothy and predictable as a fairy tale.