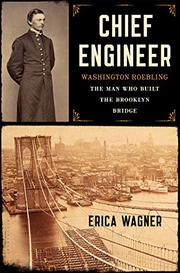 Washington Roebling, the Man Who Built the Brooklyn Bridge

A biography of the man who helped design and build one of the most iconic bridges in America.

John Roebling planned much of the iconic Brooklyn Bridge, but he died in 1869, just before scheduled construction. The project fell to his son, Washington (1837-1926), and it took 14 years. New Statesman contributing writer Wagner (Seizure, 2007, etc.) chronicles the story of a father’s influence on the son and the son’s influence on his own family. There are plenty of texts about the Roeblings and their bridge—notably, David McCullough’s The Great Bridge (1972)—but this portrait has the advantage of Washington’s recently recovered memoir of life with his father. With contemporary notes, clippings, and letters, too, it makes a fascinating tale. John, who came to America to establish a village and then a wire mill, was extremely strict, and he was cheap. He was certain that copious water would cure every illness, and he was a devout spiritualist. A Rensselaer engineer, Washington was at Gettysburg, the Battle of the Crater, and the Wilderness. He was discharged as a colonel, a title he kept ever after. Washington’s marriage was legendary. When he became incapacitated with the bends while working on the bridge, his wife, Emily, acted as his amanuensis, relaying his detailed instructions to workers on the site. Wagner recounts the festivities in Manhattan and Brooklyn when the bridge opened in 1883, but she fails to mention the widely reported panic, barely a week later, when the general public was invited to walk the span without the set fee of a penny. Many died or were injured by the crush. Washington’s fortune grew with the Roebling wire mill, which supplied the Wright brothers and Charles Lindbergh with wire for their aircraft and thousands of miles of cable wire for the George Washington Bridge. Washington remarried after Emily’s death and grew to be a hypochondriac, stingy old man, and he died in the summer of 1926, just short of his 90th birthday.