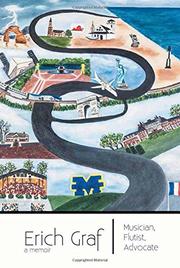 A look back on a life full of collaborative endeavors both onstage and behind the scenes.

In this solid memoir, Graf traces his influences and development as a professional artist and, more generally, as a human being. From his youth spent studying in New York City, he recalls the highly competitive culture that permeated Juilliard. He also provides unique perspectives for those who wonder about the inner workings of celebrated musical institutions: “In a jaded orchestral environment like the New York Philharmonic, only greenhorns and brown-nosers actually watch the conductor.” Eventually, Graf found his way to the Utah Symphony, where he performed as principal flutist for well over three decades. In addition, for 17 years he served as president of Local 104 of the American Federation of Musicians. Readers interested in this aspect of the lives of professional musicians may be disappointed by the section titled “President’s Messages—Local 104 Newsletters,” which presents fragments of union publications in a somewhat haphazard fashion, not even in chronological order. Instead, readers might benefit more by skipping to the tribute penned in 2011 by union attorney Joseph Hatch, which offers more cohesive, substantive details regarding Graf’s tenure as a labor leader. While the author’s recollections of childhood, adolescence, and young adulthood are certainly well-written and informative, the most noteworthy chapter is “Seven Essays on the Dénouement of the Graf Family and the Closing of the Family Home,” in which Graf returns to Ann Arbor in middle age to face the declines and deaths of his parents, including his mother’s battle with Alzheimer’s. This is a universal story told with power and heart, as in an eerie moment involving the possessions of a departed loved one: “I threw out my mother’s half-deteriorated alarm clock, and when I tossed the Hefty Bag with the forty others destined for junk, the alarm began ringing.” The strength of this moving section alone makes Graf’s memoir worth a read.