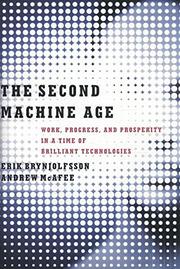 Work, Progress, and Prosperity in a Time of Brilliant Technologies

A hopeful view of the future as we enter a second machine age.

Driverless cars and 3D printers are harbingers of a new era, argue MIT colleagues Brynjolfsson (Director/Center for Digital Business; co-author, Wired for Innovation: How Information Technology Is Reshaping the Economy, 2013, etc.) and McAfee (Principal Research Scientist/Center for Digital Business; Enterprise 2.0: New Collaborative Tools for Your Organization's Toughest Challenges, 2009, etc.). Some 200 years ago, the invention of the steam engine sparked massive amounts of mechanical power to drive factories and mass production in the first machine age. Now, computers and other digital advances are providing such “a vast and unprecedented boost to mental power” that technologies once found only in science fiction are becoming everyday realities. Drawing on research, including interviews with inventors, investors, entrepreneurs, engineers and others, the authors describe the forces driving the emerging age, notably the digitization of nearly everything, which increases understanding and fosters innovation, and an amazing exponential growth in improvements. We’re now seeing “the emergence of real, useful artificial intelligence (AI) and the connection of most of the people on the planet via a common digital network.” As machines complete cognitive tasks—as opposed to physical ones—engaging in pattern recognition and complex communication, AI will do more and more, for example, giving key aspects of sight to the visually impaired and restoring hearing to the deaf. Along with benefits, including greater amounts of individual choice, technological progress will bring economic disruption, leaving some people behind and workers without jobs. The authors describe the large differences that are already apparent among people in both income and wealth and explain how individuals can improve their skills to maintain healthy wage and job prospects. "Our generation has inherited more opportunities to transform the world than any other," they write. "That's a cause for optimism, but only if we're mindful of our choices."