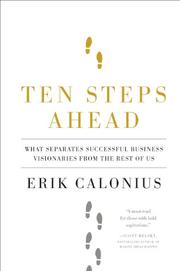 What Separates Successful Business Visionaries from the Rest of Us

A journalist who has tried to understand visionary business entrepreneurs by hanging out with them adds a study of brain science to the mix.

Calonius (The Wanderer: The Last American Slave Ship and the Conspiracy that Set Its Sails, 2006) interviewed Richard Branson, Steve Jobs and other famous business visionaries while reporting for the Wall Street Journal and Fortune. Eventually, the author decided he needed to supplement what the visionaries told him about their successes with an intense study of neuroscience, including the field of cognitive psychology. The human brain recognizes patterns, and Calonius hoped to determine how the patterns recognized by his subjects led to success. The author looks at Branson at the Virgin group of businesses, Jobs at Apple computing, Berry Gordy Jr. at Motown records, Andy Grove at Intel and a few others (women entrepreneurs are nearly absent, except for second-tier attention to clothing designer Diane von Furstenberg). Although the path to success is littered with luck (treated in its own chapter), Calonius isolates human factors that he labels awakening, seeing, intuition and scaling up the vision. He explains each factor through a mixture of anecdotes and tutorials on brain functioning. Visionaries sometimes surprise family members, high-school classmates and others who knew them before they broke through, and they do not tend to be voted most popular in the class. However, if they do win that accolade at a young age, they are even less likely to be voted most likely to succeed. Although some of the author’s portrayals are infused with hero worship (especially regarding Branson), the personal narratives make the hagiography palatable. Through no fault of Calonius, some of the lessons are maddeningly vague. Intuition, after all, is tricky to describe in concrete language, especially when it seems like nothing more than “going with the gut.”

A breezy account, with a special attraction for those who would rather not digest full-length biographies of Jobs, Branson et al.