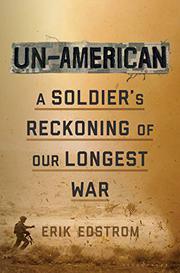 An Afghanistan veteran assails war and the military.

In his debut book, Edstrom makes it abundantly clear that he hates war, especially America’s “two illegal wars of aggression” in Afghanistan and Iraq and the “sensationalized” war on terror. The author also has little positive to relate about West Point, military training, military spending, the military’s refusal to let people in uniform opt out of wars they oppose on moral grounds, and the governments that lead us into these wars. Throughout, Edstrom is unrelenting in his criticism. “The U.S. military, as it is currently used,” he writes, “is not a wholesome institution: it escalates violence around the world, and inculcates a pro-nationalism, pro-militarism dogma that is hard to shake.” Edstrom certainly has the credentials to speak his mind on this topic: He is a graduate of West Point and the U.S. Army Rangers School, was selected for the U.S. Special Forces, received a Bronze Star, and served as an infantry platoon leader in the toughest parts of Afghanistan. His story, part memoir and part manifesto, runs from his late high school days through West Point and the war in Afghanistan to 2019. He opens by asking his readers to consider three visions: their own death in war, how they would feel if another nation invaded the U.S. to protect us from an unpopular president, and what the world would be like if there had been no war. Then he divides the book into three parts, each part examining one of the visions. Edstrom does not shy away from recounting the gruesome conditions and challenges he faced during his deployment, including watching his friends being blown apart by roadside bombs. While he does express some hope, he believes peace will happen only if all Americans demand an end to war.

An insider’s you-are-there look at modern war. Veterans will love it or hate it, but there will be few in between.