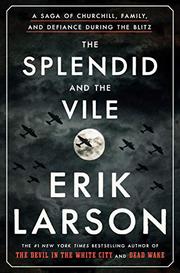 THE SPLENDID AND THE VILE

A Saga of Churchill, Family, and Defiance During the Blitz

The bestselling author deals with one of the most satisfying good-vs.-evil battles in history, the year (May 1940 to May 1941) during which Churchill and Britain held off Hitler.

Bookshelves groan with histories of Britain’s finest hour, but Larson (Dead Wake: The Last Crossing of the Lusitania, 2015, etc.) employs a mildly unique strategy, combining an intense, almost day-to-day account of Churchill’s actions with those of his family, two of his officials (Frederick Lindemann, who was Churchill’s prime science adviser, and Lord Beaverbrook, minister of air production), and staff, including private secretary Jock Colville and bodyguard Walter Thompson. Since no one doubted they lived in extraordinary times and almost everyone kept journals and wrote letters, the author takes full advantage of an avalanche of material, much of which will be unfamiliar to readers. Churchill remains the central figure; his charisma, public persona, table talk, quirks, and sybaritic lifestyle retain their fascination. Authors have not ignored his indispensable wife, Clementine (Sonia Purnell’s 2015 biography is particularly illuminating), but even history buffs will welcome Larson’s attention to their four children, especially Mary, a perky adolescent and his favorite. He makes no attempt to rehabilitate Winston’s only son, Randolph, a heavy-drinking spendthrift whose long-suffering wife, Pamela, finally consoled herself with a long affair with American representative Averell Harriman, which was no secret to the family and was entirely approved. Britain’s isolation ended when Germany invaded the Soviet Union on June 22, 1941, but Larson ends on May 10. The Blitz was in full swing, with a particularly destructive raid on London, but that day also saw Rudolf Hess, Hitler’s second in command, fly to England and engage in a wacky attempt (planned since the previous autumn) to negotiate peace. Nothing came of Hess’ action, but that day may also have marked the peak of the Blitz, which soon diminished as Germany concentrated its forces against the Soviet Union.

A captivating history of Churchill’s heroic year, with more than the usual emphasis on his intimates.