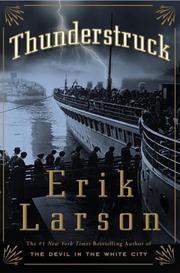 A murder that transfixed the world and the invention that made possible the chase for its perpetrator combine in this fitfully thrilling real-life mystery.

Using the same formula that propelled Devil in the White City (2003), Larson pairs the story of a groundbreaking advance with a pulpy murder drama to limn the sociological particulars of its pre-WWI setting. While White City featured the Chicago World’s Fair and America’s first serial killer, this combines the fascinating case of Dr. Hawley Crippen with the much less gripping tale of Guglielmo Marconi’s invention of radio. (Larson draws out the twin narratives for a long while before showing how they intersect.) Undeniably brilliant, Marconi came to fame at a young age, during a time when scientific discoveries held mass appeal and were demonstrated before awed crowds with circus-like theatricality. Marconi’s radio sets, with their accompanying explosions of light and noise, were tailor-made for such showcases. By the early-20th century, however, the Italian was fighting with rival wireless companies to maintain his competitive edge. The event that would bring his invention back into the limelight was the first great crime story of the century. A mild-mannered doctor from Michigan who had married a tempestuously demanding actress and moved to London, Crippen became the eye of a media storm in 1910 when, after his wife’s “disappearance” (he had buried her body in the basement), he set off with a younger woman on an ocean-liner bound for America. The ship’s captain, who soon discerned the couple’s identity, updated Scotland Yard (and the world) on the ship’s progress—by wireless. The chase that ends this story makes up for some tedious early stretches regarding Marconi’s business struggles.

At times slow-going, but the riveting period detail and dramatic flair eventually render this tale an animated history lesson.