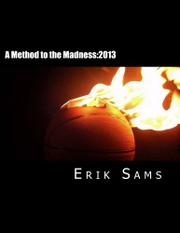 A Guide to March Madness Basketball

A joyous outpouring of numbers aimed to soothe the jangled nerves of those caught up in the great, late-winter college basketball tournament.

Sams has marshaled a dizzying array of statistics in a variety of original concatenations to help navigate March Madness—the annual college basketball championship series. The “madness” is a result of the sheer number of teams at play that are slowly winnowed down throughout the month. Sams wants to make some sense of the process, perhaps glean a theme or pattern; if nothing else, he will have tidy histories of team performance that may reveal tendencies. This book is a very straightforward item, mostly bare of narrative (all of which is contained in its brief, explicatory introduction). Its purpose is to present team statistics since 1985 (the first year with a field of 64 teams), which he has arranged alphabetically. For each winning team of the 64 invited to the tournament, Sams provides scads of information, including records for each round of play, team success (or failure) depending on how highly they were ranked going into the tournament and how well teams did against opponents from different regions throughout the country. Even readers without a jones for statistical analysis can get caught up in the almost hallucinatory experience of trying to make something of all the figures. And thanks to the bare-bones presentation, each team—from the Air Force Academy to Xavier, from big guns to derringers—exerts its own fascination. Kentucky, Duke, Kansas and the like have pages of material, while Long Island, Long Beach and Liberty pass quietly under the radar.