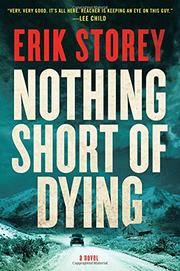 NOTHING SHORT OF DYING

Newly sprung from three years in a Juárez prison, school-of-hard-knocks product Clyde Barr answers an SOS call from his sister Jen, who is being held in the Colorado mountains by a big-time drug supplier.

Victimized by their mother's abusive boyfriends—one of whom left her gruesomely dead—the siblings are still dealing with childhood horrors. Barr has spent years roaming the world's trouble spots as a mercenary and hunter. Jen has a history of drug abuse. Confronting the thugs who work for Alvis, the ruthless dealer, Barr embarks on a spree of beatings and shootings that pretty much matches his dreams: "Every night was a kaleidoscope of killing and violence." He's aided by Allie, a strong-willed bartender with whom he becomes romantically involved, and Zeke, his scary one-time cellmate, who during an “especially bad" year in the slammer, killed a guard and two other men. Storey is a sturdy enough storyteller who keeps the action moving and does a passable job with his rugged setting. But the dialogue is flat: "You stay with me, neither one of us might make it out," Barr tells Allie. To which she responds, "In the long run, Barr, no one ever does." And Barr's mea culpas can invite laughter: "Damn. Another pointless death that was entirely my fault."

Storey's first novel moves along well enough, but the way he strings together violent action scenes has a paint-by-numbers quality.