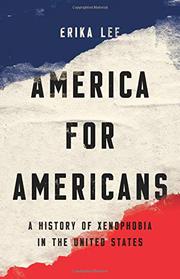 A History of Xenophobia in the United States

“The target of our xenophobia may have changed from decade to decade, but our fear and hatred of foreigners has not.” So writes Lee (Chair, Immigration History/Univ. of Minnesota; The Making of Asian America: A History, 2015, etc.), opening her discussion with examples from the last electoral cycle and the current occupant of the White House—who, though his statements are “either patently false or grossly misleading,” nevertheless cannily taps into that ancient fear. Xenophobia is a powerful motivating factor in American politics, writes Lee, even if it goes against the equally powerful notion that the U.S. is a nation of immigrants. “Even as it has welcomed millions from around the world,” she observes, “it has also deported more immigrants than any other nation—over fifty-five million since 1882.” Even as the current administration is widening its field of targets to include legal as well as illegal immigrants and to curtail both, it draws on former movements: the Know-Nothings of the 19th century, for instance, who “argued that Catholicism and Catholics were dangerous to American values and institutions”—and it’s no accident that the Hispanic migrants are mostly Catholic, even as Islam is also singled out for exclusion today. Lee charts various movements in the nation’s history, from Benjamin Franklin’s lament even before the Revolution that German immigrants would not be able to assimilate to anti-Irish measures in the years around the Civil War, and then the fervor those very Irish exercised in opposing immigration by Italians, Asians, and Jews. Throughout, the author notes that xenophobia is good business for its purveyors—politicians, TV commentators, radio hosts, and the like—and it is likely to remain a point for those people to flog in the coming election, as the president proclaims, “Our country is full."

A carefully constructed history of wide interest to students of American politics.