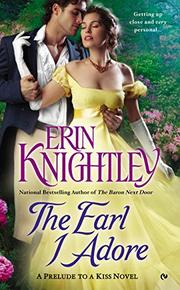 THE EARL I ADORE

A young lady with a modest dowry is husband-hunting at a summer music festival, but her task becomes more urgent as she waits for the news of her sister’s elopement to leak out and ruin her chances.

Knightley (The Baron Next Door, 2014, etc.) returns with the second book in her Prelude to a Kiss series. The deck is stacked against Sophie Wembley in the marriage mart. Her dowry is modest, her family’s status is low, and her talent as an oboe player is an unconventional one. Unable to afford a third season for Sophie, her mother brings her to a long music festival in Somerset, hoping to find an unconventional husband for an unconventional bride. Sophie is having the time of her life until news reaches them that her sister Penelope has eloped with someone unsuitable, and the family’s low status is about to get even lower. Sophie figures she has two weeks to catch a husband before word gets out, and who better to catch than the man she’s secretly been pining for? Little does Sophie know that her chosen beau, John Fairfax, Earl of Evansleigh, has made a pact with his sister never to marry, both of them afraid to pass on the mental instability that runs in their family. Evan, as he’s known to his friends, is well aware that Sophie’s mother is trying to trap him into marrying her daughter, but he’s drawn to Sophie nonetheless. Meanwhile, his sister, Julia, is pulling for Sophie and her music-loving group of friends.

Early in the novel, stereotypes like the intelligent daughter with a stupid, grasping mother threaten to ruin the plot, but the lively characters and engaging storyline save the day. The musical events threaded throughout also add depth. Well worth reading.