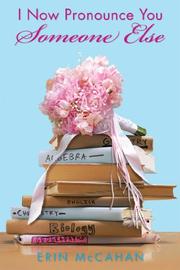 I NOW PRONOUNCE YOU SOMEONE ELSE

A 17-year-old girl who suppresses her own desires to please others gets engaged to a wonderful guy. It doesn’t sound like much of a problem, but it is, because, despite his wonderfulness, Bronwen isn’t ready to get married. And although her boyfriend, Jared, is portrayed as being almost perfect, part of his charm lies with his family, a warm and affectionate unit Bronwen longs to be part of. This is because Bronwen struggles with her own, more distant clan: a disengaged brother, a mother who cares more about appearances than honesty and a stepfather who failed to adopt her as promised. In the course of the story Bronwen tastes true love, gets in touch with her feelings and breaks through to her family. It’s a believable journey, though it’s flatter than it should be, probably because the central romantic relationship is essentially dull and without conflict. The book finally catches fire during Bronwen’s psychological crisis, at last engaging readers’ feelings as the protagonist summons up the courage to express herself, leading to an emotionally satisfying resolution. “Finally” is the operative word, though. (Fiction. 12 & up)