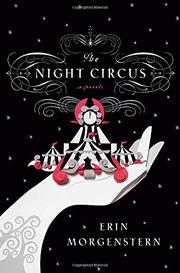 The world’s not big enough for two wizards, as Tolkien taught us—even if that world is the shiny, modern one of the late 19th century, with its streetcars and electric lights and newfangled horseless carriages. Yet, as first-time novelist Morgenstern imagines it, two wizards there are, if likely possessed of more legerdemain than true conjuring powers, and these two are jealous of their turf. It stands to reason, the laws of the universe working thus, that their children would meet and, rather than continue the feud into a new generation, would instead fall in love. Call it Romeo and Juliet for the Gilded Age, save that Morgenstern has her eye on a different Shakespearean text, The Tempest; says a fellow called Prospero to young magician Celia of the name her mother gave her, “She should have named you Miranda...I suppose she was not clever enough to think of it.” Celia is clever, however, a born magician, and eventually a big hit at the Circus of Dreams, which operates, naturally, only at night and has a slightly sinister air about it. But what would you expect of a yarn one of whose chief setting-things-into-action characters is known as “the man in the grey suit”? Morgenstern treads into Harry Potter territory, but though the chief audience for both Rowling and this tale will probably comprise of teenage girls, there are only superficial genre similarities. True, Celia’s magical powers grow, and the ordinary presto-change-o stuff gains potency—and, happily, surrealistic value. Finally, though, all the magic has deadly consequence, and it is then that the tale begins to take on the contours of a dark thriller, all told in a confident voice that is often quite poetic, as when the man in the grey suit tells us, “There’s magic in that. It’s in the listener, and for each and every ear it will be different, and it will affect them in ways they can never predict.” Generous in its vision and fun to read. Likely to be a big book—and, soon, a big movie, with all the franchise trimmings.