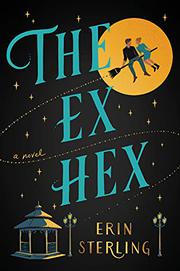 A small-town witch is forced to make magic with the man who broke her heart when his return sets a series of supernatural disasters in motion.

Nine years ago, Vivienne Jones decided to get over the boy who'd dumped her in the only way she knew how: by putting a curse on him. Given that it had been a spell performed after copious amounts of vodka, she hadn't placed much stock in its success. But when Rhys Penhallow finally reappears for the annual fall festival in Graves Glen, Georgia, home to both witches and ordinary people, Vivi begins to sense that her breakup hex might have worked a little too well. In the beginning, it's easy for her to dismiss some wacky occurrences as pure coincidence, but after Rhys invites her to help him magically recharge the town's secret ley lines and the spell goes terribly wrong, they realize they have more problems on their hands than a mere curse. Now, Graves Glen is threatening to fall into total chaos, with problems ranging from possessed wind-up skulls to a talking cat to a very unhappy library ghost. It doesn't help that as far as Vivi's attraction to her ex is concerned, it's almost too easy for her to fall right back into the past and all her old feelings. Putting out small magical fires around town is one thing, but the more often Vivi and Rhys have to put their heads together to solve this mess, the more tempting it is to see if they can pick up where they left off nine years ago—if Vivi can ever forgive Rhys for breaking her heart. Although the story's resolution may feel a bit hurried, Sterling's novel is ultimately crisp and sweet, like biting into the perfect caramel apple, and makes for an equally delicious autumn treat that will sweep readers up into a world of whimsical magic.

A wickedly funny rom-com about the power of second chances, family, and love.