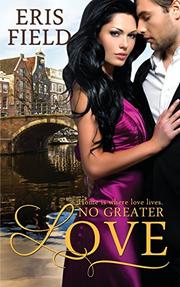 When a Turkish immigrant and a Dutch psychiatrist fall in love, a devastating diagnosis threatens to separate them forever in Field’s (Lattices of Love, 2015, etc.) latest romance.

On a cold winter night in western New York, psychiatrist Pieter Bentinck heads toward a liquor store looking for a bottle of premium Dutch gin for his mentor, Dr. Carl Ahren. There, he encounters a woman whose striking beauty leaves him breathless. Upon arriving at Carl’s home, Pieter discovers that the mysterious woman frequently stays there. Her name is Janan Coers, and Carl’s family adopted her after she was orphaned by an earthquake in her native Turkey. Pieter and Janan have both given up on finding love, but they feel a connection to each other that’s soon tested when Pieter is diagnosed with leukemia. On the eve of his return to Amsterdam, they spend an evening together, during which Pieter tempts Janan with eight tantalizing kisses. Later, she faces a dilemma when she learns she’s pregnant with twins. When Carl decides to return to his home country, he makes an offer that would provide security for Janan and the babies. But her choice could put a future with Pieter at risk. Field’s fast-paced romance features a compelling central love story and well-developed protagonists; their relationship develops quickly but never seems forced or contrived. But a promising subplot involving one of the supporting characters needs more detail. Although Carl drives much of the narrative, his story is less successful; he’s a Dutch Jew who was sent to America prior to the outbreak of World War II, and he’s struggling to reclaim his family’s home and fortune and concerned about the motives of his great-nephew, Arnold. However, it’s unclear whether Arnold truly has ulterior motives, as he’s only mentioned in passing.

An often charming, if lightweight, tale with memorable characters and a tender love story.