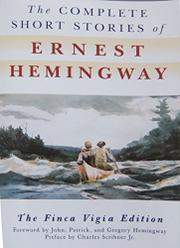 What's most worthy in this hefty, three-part volume of still more Hemingway is that it contains (in its first section) all the stories that appeared together in the 1938 (and now out of print) The Fifth Column and the First Forty-Nine Stories. After this, however, the pieces themselves and the grounds for their inclusion become more shaky. The second section includes stories that have been previously published but that haven't appeared in collections—including two segments (from 1934 and 1936) that later found their way into To Have and Have Not (1937) and the "story-within-a-story" that appeared in the recent The garden of Eden. Part three—frequently of more interest for Flemingway-voyeurs than for its self-evident merits—consists of previously unpublished work, including a lengthy outtake ("The Strange Country") from Islands in the Stream (1970), and two poor-to-middling Michigan stories (actually pieces, again, from an unfinished novel). Moments of interest, but luckiest are those who still have their copies of The First Forty-Nine.