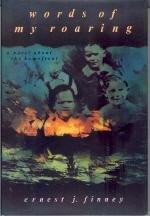 WORDS OF MY ROARING

A sweeping old-fashioned novel that ambitiously explores an unfamiliar theme—life in wartime California—with sometimes too much corroborative detail. This time out, Finney (Winterchill, 1989; Birds Landing, 1986) describes the effects of war on a small town near San Francisco that becomes home to a naval-training base for Pacific-bound recruits, and a shipyard that attracts families seeking work- -families like the Mitchams, who come all the way from Tennessee to join the rich mix of reluctant recruits, veteran sailors, and teachers from out of state. The story, told in the first person by a rotating succession of characters, covers the war years, with a final fast-forward to 1975 to provide a satisfying wrap-up. At the heart of the novel are Chuck Sweet, a Navy veteran, and Avery Fontana, a young boy, who, like characters in a William Golding novel, act as agents of grace evoking redeeming responses from the rest. Both are haunted by the past: Sweet's Hopi mother committed suicide, and more recently he himself not only survived the attack at Pearl Harbor but came through a further ordeal at sea. Avery, whose father is in prison for a murder that Avery witnessed, lives with an aged cousin. He befriends young Ruthie Mitcham, who will ultimately hold her family together as they survive the father's death, a brother's desertion, and their shipyard-worker mother's depression. Sweet, troubled by memories of his ordeals, fears going back to sea; he also fears falling in love with Avery's teacher, the pretty Elaine, who lives next door to the Mitchams. Lives intersect, and the war is a constant presence as rationing, air raid alarms, and troublemaking recruits dramatically affect life in the town. But happiness wins out—sort of. Finney has the period down pat—but, finally, the story falters amidst all its conflicting if admirable ambitions. Still, a readable tale of life at home during the Big One.