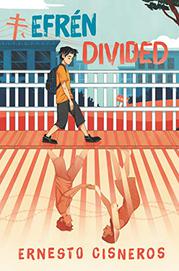 A young boy must become an adult overnight when his mother is deported.

Twelve-year-old Efrén Nava’s world is turned upside down the day he comes back from school and his mother is nowhere to be found. His neighbor Doña Chana tells him that an ICE raid was conducted at the supermarket and that Amá was picked up and deported to Mexico. When his father takes on a second job to make ends meet, Efrén becomes the primary caregiver for Mía and Max, his younger twin siblings. Unsure of how much information about his mother’s fate to give them, Efrén tries his best to make Amá’s miracles his own as he struggles to keep his siblings safe, feed them, and take them to school while still dealing with his own schooling. Taking care of Max, whose oxygen supply was cut off during childbirth and has learning disabilities, and figuring out which friends and adults to trust with his secret add layers of responsibility Efrén feels unprepared to deal with. Debut author Cisneros paints a vivid and palpable #ownvoices picture of the lost childhoods as children and parents are separated due to immigration issues. But even as Efrén’s world seems to be crashing around him, Cisneros celebrates the kindness of the Mexican American community and its richness of food, culture, and resilient spirit.

Honest and tender: a must-read.