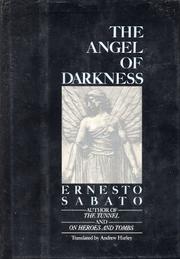 THE ANGEL OF DARKNESS

A dense and often leaden novel by Argentinean writer Sabato (On Heroes and Tombs, 1981) that comes to life—and that only momentarily—in the last 40 or so pages. Ponderously cerebral, the story is essentially an examination of the increasing pervasiveness of evil. Set in Buenos Aires in the early 1970's at the height of the military dictatorship—when innocent young men were imprisoned, tortured and then ``disappeared'' without a trace—Sabato has more than enough material for this tale of a labyrinthine conspiracy of evil spreading through the city like an infection. The author himself is a character, not the author as a figure as in metafiction but as ``just another character, the same sort of character as all the rest, which however do come from the soul or spirit of anima of the author. The author would be a man maddened, somehow, and living with his own doubles, aspects of his own self.'' Accordingly, while S., the writer, follows a mysterious Dr. Schneider (who might be a former Nazi), is accused by a young idealist of selling out, and searches for a society of the blind rumored to be responsible for all that is wrong, a drunkard across town sees fiery dragons in the sky; a young man is tortured and killed for his beliefs; and, in the salons and bars alike, unease and despair are rife. These disparate parts abruptly all come together, and S. and Sabato find comfort in the notion of peace—``a melancholy restfulness that a child feels when he lays his head in his mother's lap and closes his eyes still filled with tears, after the terrors of a nightmare.'' Some interesting insights and searing accounts of torture, but these are so deeply mired in self-conscious intellectualism that their impact is soon lost. Heavy-going.