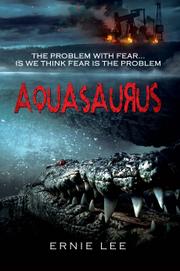 Jesse Perrine’s spelunking excursion with friends Jake Hew and Cody Hughes is cut short when an injury knocks Cody out cold. The two cohorts get Cody to safety using a tarp found in the cave and are in for a shock: the tarp’s actually a reptile hide. They show the pelt to Jesse’s Texas State professor Tom Morrison, who surmises that an enormous and (supposedly) extinct crocodile lives in the Texas aquifer. Or alligator, which Tom can verify when, at his suggestion, the trio returns to the cave for “the discovery of the century.” There’s definitely something down there, as well as a few human bodies, but trouble’s brewing aboveground. TJ Howlett, before his dad’s partner gets controlling interest of HNH Oil Company, hopes to strike oil on an HNH project in reality owned by TJ’s reputedly defunct business. Desperate to crack through the granite dome blocking the drilled hole, operator Clint Marshall opts for something faster, dangerous, and not exactly legal. What he does literally shakes central Texas. It also triggers a cave-in, trapping Jesse, Jake, and Tom inside with a gargantuan crocodile—and possibly creating a passage for the creature to squeeze through and wreak chaos in the city. The novel excels at what other giant-monster stories often skip: character development and suspense. Jesse’s girlfriend, Rita Martin, for example, is more than just his love interest. She and her friend Katie are experienced rock climbers and the men’s would-be rescuers. Relationships, too, are fascinating, like Katie’s with her father, whose reveal is a surprise. Readers will be more on edge than Jesse, et. al., since they are privy to the fact that Aquasaurus, which the narrative eventually calls the creature, is indeed in the cave. There’s astonishingly little violence, but then the monster, whose ferocity is unmistakable, is a topic of discussion more often than a physical presence. Lee ends with an all-around solid wrap-up, including comatose Cody and a character (or two) who doesn’t make it, with a wide opening for another book.

The scaly beast is definitely the star, but pre-attack scenes are rife with genuine trepidation and multidimensional characters.