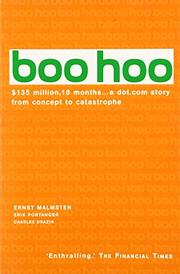 Malmsten, co-founder of online fashion and sports retailer boo.com, wrote this warts-and-all account because he realized it “could serve to capture all the broken dreams of the dot.com era.” In 1993 he began working with childhood friend and former model Kajsa Leander to promote Nordic literary events in New York. This led to their establishing a Swedish publishing house, then an early bookselling Web site that they sold for millions, instilling the desire to do “something really ambitious.” They seized upon the idea of a fashion website, since consumers spend more on clothes than on entertainment, with higher profit margins, and finding cutting-edge sportswear was at the time difficult in much of Europe. Malmsten depicts what followed in exhaustive detail. The partners had great success in developing a business plan and site prototype to attract high-end funding but didn’t realize the pitfalls that lay ahead. Well before their technology platform was established, let alone the 3-D imaging capability that lured investors, they’d hired more than a hundred people in London, established offices in New York, Stockholm, Paris, and Munich, and started a fully staffed online magazine. The site’s launch was repeatedly delayed, yet the “street” valuation of the company kept skyrocketing. But then bankers delayed the IPO due to diminished confidence, which resulted in the first round of mass layoffs, and eventually ceased the large cash infusions that sustained the profligate company. This cautionary tale illuminates how youthful Internet visionaries secured pie-in-the-sky infusions of capital from companies like J.P. Morgan and LVMH. However, they must also endure endless besotted recollections of the good life and heedless overspending; Malmsten’s obsessive name-dropping of luxury brands and yearning recollections of the snooty club/hotel scene indicate just what the so-called “revolution” was all about for him.

Despite the preening tone, a useful business history and a panoramic view of the foolhardy excesses of the late 1990s.