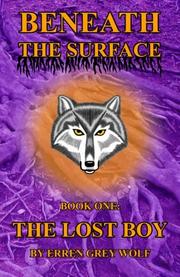 In this first volume of her meticulously plotted Beneath the Surface saga, Grey Wolf describes a brutal future society in which humans’ ingenuity and survival instincts lead to devastating consequences. The expanding sun threatens to destroy the Earth in the 38th century, so humans set off in arklike spaceships for planets with ancient Greek and Norse names (Freya, Titan, and so on). Such a mass exodus should provide an opportunity for nations to reimagine and improve their societies—but instead they engage in bloody wars, racism and enduring animosity as they grab for resources. Grey Wolf moves from a broad description of this fictional universe to focus on the story of Erren Archer, a boy born on a spaceship bound for the planet Midgard, and his older brother Sean, both of whom have telepathic powers. When the boys are separated, they must use their survival skills and unique powers to reunite. Grey Wolf’s worldbuilding is so complete that she includes an extensive index of calendars (such as “Freya’s Tertiary Sub-Year” and “Days of the Week: A Brief History”), geographical and technological maps, an appendix of abbreviations and explanations of spiritual systems; the book even provides intermittent original poetry that strives for literary gravity. The writing style tends to tell more often than show, but readers more interested in plot and setting will likely forgive occasional stiff dialogue and sketchily drawn characters. At more than 600 pages, readers may find this initial installment hard going at times, but Grey Wolf’s universe is simply too wide-ranging for anything less.

A hyperdetailed addition to the sci-fi genre.