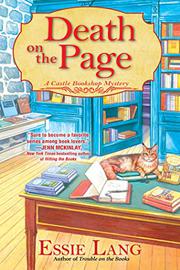 DEATH ON THE PAGE

After living most of her life in Boston, Shelby Cox returned to Alexandria Bay in the Thousand Islands to discover that the mother she’d thought dead had actually deserted the family for a banker from Georgia. Now Shelby runs the seasonal bookstore in romantic Blye Castle on Blye Island and helps her Aunt Edie, who refuses to discuss her mother, in the main Alexandria Bay store, which they co-own. She’s already been involved in one murder investigation (Trouble on the Books, 2019), much to the dismay of Police Chief Tekla Stone and Shelby’s boyfriend, Coast Guard Investigative Services Agent Zack Griffin. Since Edie’s taking it slow after knee surgery, Shelby is finding it a challenge to manage a book signing by popular true-crime author Savannah Page. Thanks to the help of Savannah’s fiance, Liam Kennelly, the event goes uneventfully until a determined-looking woman named Jenna Dunlap angrily accuses Savannah of having stolen her idea and her research about the unsolved murder of Joe Cabana, who died on Blye Island. Savannah is staying at Blye Castle that night, having gotten permission from the society that runs the place, and when she's found dead at the bottom of a flight of steps leading to a secret passage, her laptop missing, Shelby just can’t stop herself from snooping. Savannah’s drop-dead-gorgeous agent, Bryce O’Connell, shows up and quickly gets interested in Erica, Shelby’s best friend. Several small items missing from Blye Castle, including the architectural drawings showing the secret passages, make Shelby wonder whether someone was looking for a way to steal in and kill Savannah. Rachel Michaels, another wannabe true-crime author, claims she was due to meet with Savannah to get tips about writing. Shelby has several suspects and even more people warning her to keep out of the investigation, but it’s not in her nature to give up.