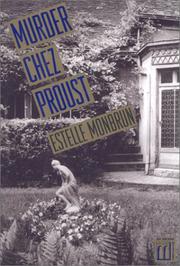 The annual convention of the Proust Association at the home of the novelist's aunt outside Chartres is shattered by the murder of the Association's founder-president. But who really weeps for Adeline Bertrand-Verdon? Chief Inspector Jean-Pierre Foucheroux, on the spot in place of his ailing Proustian sister, finds nothing but crocodile tears among the plagiarizing American theorist whom the untalented Bertrand-Verdon was pressing for an academic appointment, the Parisian editor of Proust she was blackmailing into offering her a coeditorship, the nobleman she was inveigling into a bigamous marriage, or the sweet, shy intern whose priceless discovery15 unpublished notebooks tracing Proust's evolution from Jean Santeuil to A la rechercheshe'd blithely appropriated. Which of this self-promoting monster's put-upon colleagues used the convention as a declaration of independence? (And what's become of those 15 notebooks?) No Proustian credentials are required to enjoy this suave debut, enlivened by the obligatory corrosive snapshots of academics as comically obsessed careerists.