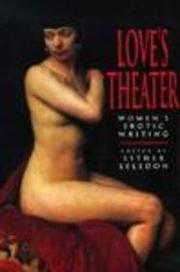 Selsdon has anthologized some powerful writing, which she groups under six headings: Displacement, Anticipation, Alienation, Submission, Love, and Empowerment. ``Finally, and only in the late 1990s,'' she writes in a harmless introduction in which she sometimes seems to think she is inventing the wheel, ``women have started using reverse sexual imagery to its full logical conclusion—`empowerment.' '' (The late 1990s? They haven't happened yet.) Luckily, the introduction is brief, as are Selsdon's section prefaces, all of which suffer from a similar fetish for sociological simplification. Most of the selections themselves—by, among others, Emily Bronte, Pauline Reage, Jane Smiley, Dorothy Parker, and Mary Gaitskill—aren't erotica: They're more about the apprehension of sex than about sex itself. Happily, however, most are rich enough to defy the bloodless categorization that Selsdon tries to impose on them.