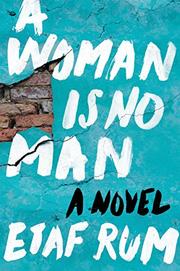 A WOMAN IS NO MAN

In his last sermon, the Prophet Muhammad said, "Observe your duty to Allah in respect to the women, and treat them well," but in many Muslim countries, tradition relegates women to subservient roles. Isra Hadid, the heroine of Rum's debut novel, has been reminded of this every day of her life.

Unable to complete school in Palestine, where she grew up, Isra was married off by her parents to American deli owner Adam Ra’ad and sent to Brooklyn, New York, where she was forced to live in the crowded Bay Ridge home of her in-laws, Fareeda and Khaled, and their three other children. Almost immediately tensions erupted, and the newly arrived immigrant found herself on the receiving end of near-daily beatings and verbal abuse. Conditions further worsened after Isra gave birth to four daughters in little more than five years—her lack of sons being evidence, Fareeda claims, of Isra’s deficiency. The situation shifts dramatically, however, after Isra and Adam are killed in an accident, leaving their children to be raised by the Ra’ads. Now, a decade after Isra’s and Adam’s deaths, their oldest child, Deya, age 18, receives a mysterious message from an unidentified source, asking her to travel to a Manhattan bookshop. When she does, an estranged family member reveals some jarring truths about the family’s history. More importantly, the disclosure gives Deya the tools she needs to take charge of her life rather than allowing Fareeda and Khaled to marry her off. In a note accompanying an advance copy of her book, Rum acknowledges that writing her intergenerational saga meant "violating [the] code of silence” and might even bring “shame to [her] community.” Nonetheless, in telling this compelling tale, Rum—who was born in Brooklyn to Palestinian immigrants herself—writes that she hopes readers will be moved “by the strength and power of our women.”