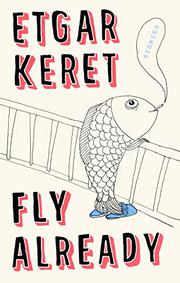 In 2004, Keret (The Seven Good Years, 2015, etc.) wrote a children’s book called Dad Runs Away With the Circus, a sly tale about a father chafing at the binds of domesticity. He’s still exploring the theme a decade and a half later: The narrator of the title story is trying to save a potential suicide on a nearby rooftop, but his toddler son is clamoring for ice cream while the dad in “To the Moon and Back” promises anything in a candy shop to his son—who then petulantly demands the cash register. (The kids aren’t such great fans of conventional families either: In the gently Kafkaesque “Dad With Mashed Potatoes,” three children are happily convinced their father has shape-shifted into a rabbit.) Keret, who earlier in his career worked more often in flash-fiction mode, benefits from a wider canvas here, particularly in Saunders-esque speculative stories like “Tabula Rasa,” a fable about cloning, or “Ladder,” about the angels left to maintain heaven after God dies. And though Keret has typically eschewed directly addressing tensions in his home country, a number of these stories display the sharp spikes of good political satire, like “Arctic Lizard,” which imagines teenagers recruited for war duty during Trump’s third term. Better still is an untitled story constructed of emails between the director of an escape room who refuses to open his doors on Holocaust Remembrance Day and a stubborn would-be patron; their cartoonishly escalating squabble exemplifies the scramble for the moral high ground that characterizes diplomatic rhetoric. A handful of pieces have flat jokes or weak concepts, but every piece demonstrates Keret’s admirable effort to play with structure and gleefully refuse to be polite about family, faith, and country.

An irreverent storyteller who has yet to run out of social norms to skewer.