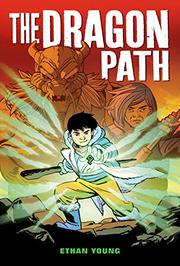 A family prophecy and long-kept secrets spell out a new destiny for a Chinese clan.

Young throws readers right into the fray in his latest steampunk graphic novel. A motorized village, revealed to be the Wong Clan’s, is returning to their ancestral home, the Old Land. With the encouragement of his dubious adviser, Quan, Lord Wong believes that in returning they will fulfill a prophecy. Meanwhile Lord Wong’s willful young son, Prince Sing, has been seeing visions about his mother’s death and what initiated his ancestors’ exodus from their homeland. When the clan is attacked by the reptilian Dragon Tribe for trespassing and past injustices, Sing is lost. Presumed dead, Sing is in fact in the company of Ming the Mystic and a colossal black-and-white feline with a single horn. Themes of betrayal and true identities, with magic woven throughout, create an action-packed adventure. The neatly aligned panels are filled with movement thanks to Young’s definitively lined, bold, cartoon style. Young’s choice of a neon color palette and artful use of shading bring a vibrancy and heightened emotional depth to each scene. Though the plot teems with characters and complicated interwoven backstories, an even pace and balanced story are maintained. A few lingering questions at the end are a small price to pay for the fun.

This eclectic world of Chinese culture, fantasy, and nonstop action is worth exploring.