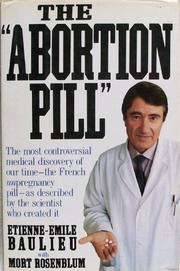 Dubbed the ``abortion pill'' by the media, and the ``death pill'' and a ``human pesticide'' by some of its opponents, RU-486 is, according to this thorough account by its developer, largely misunderstood. French endocrinologist Baulieu (Biochemistry/Paris-Sud) explains just about everything you ever wanted to know about RU- 486. It is, he says, a ``contragestive,'' operating in the middle ground between a contraceptive and a conventional abortion, able to counter gestation before pregnancy begins. He recounts the work that led to RU-486 and reveals the forces that have made its manufacturer, Roussel-Uclef, reluctant to market it (Baulieu receives no royalties from Roussel-Uclef on products resulting from his research). He clarifies what RU-486 does and how it does it, explaining step by step the procedure followed in France when a woman chooses this option. Baulieu also provides a quick survey of abortion laws and practices around the globe. Although he predicts that RU-486 will spread with relative ease to many industrialized countries, he is concerned about its reception in the US and the slowness of the World Health Organization to support its use in Third World countries. Essentially, Baulieu is an optimist, believing that the obstacles to RU-486 are irrational and will be overcome, that ``politics will give way to science.'' The final chapter considers the question of when human life begins and looks at some of the other possible medical uses for RU-486, while an appendix provides a brief lesson in the biochemistry of RU-486. A forceful and articulate argument for the reproductive freedom of women, and a clear presentation of how RU-486 can help to ensure safe exercise of that freedom. (Twenty-four b&w photographs—not seen.)