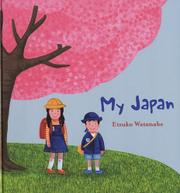 Originally published in France, this picture-book introduction does half the job. Seven-year-old Yumi shares information about home, her younger brother Takeshi, school, holidays and a summer visit to see grandparents. The vivid paintings have a naïve quality and include many objects, including Japanese and Western toilets, complete with diagrams of how they are used. In one spread, the kitchen is pictured on one side and small vignettes of various foods fill the opposite page. Some are familiar (hamburger and spaghetti), but without descriptions, other dishes will remain unknown to anyone who is not a Japanese foodie. Japanese translations of each heading are placed decoratively in upper-left corners, but without pronunciations. Illustrations of several origami projects appear, but the word itself is not used. Yumi tries to explain the writing systems, using the difficult word “ideogram” to explain kanji, and the syllabic hiragana system is shown. Photos of real kids playing with their electronic gadgets would have enhanced this fairly traditional description. With a little help from knowledgeable adults, this book may serve its purpose. (Informational picture book. 5-8)