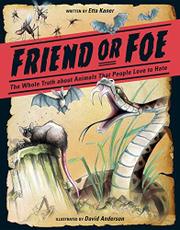 The Whole Truth About Animals People Love to Hate

An album of scary, dangerous, or revolting creatures—all of which have better sides.

For 10 animals, from rats and roaches to sharks and wolves, Kaner presents in turn a selection of destructive or disgusting habits, then beneficial behaviors. Though negatives tend to be more vivid than countering claims, readers who swoon over gross bits will find plenty of passages like “How does a vulture cool off on hot days? It poops on its legs,” and “It takes much less feed, land, and water to raise a pound of cockroach meat than it does to raise a pound of beef.” Her titles are thrilling too: “Leeches Suck.” “AAH! SHARKS!” “Vultures Deserve Better Press.” Along with being sometimes unconvincing (“Marvelous Mosquitoes”), most of her observations are generalized or, like a suggestion that a certain mosquito-eating spider might be the “solution” for malaria, facile. Moreover, her invitation to make a “friend or foe?” choice for each animal sets up a series of false dichotomies that she then confusingly (if rightly) dismisses abruptly with a concluding explanation that “Animals Are Just Doing Their Thing.” Anderson adds a comical tone to the enterprise with cartoon illustrations of beasties bearing human expressions and uttering such quips as “Howl’s it going?” or “I’m glad pie-thon isn’t on the menu!”