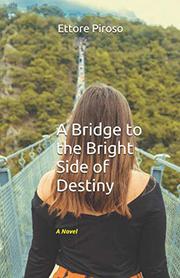 A BRIDGE TO THE BRIGHT SIDE OF DESTINY

Stories about lifelong loss and trauma intersect in this debut novel.

When 73-year-old Emanuel Cortez dies alone in his armchair, his story dies with him—a tale about a fiancee who disappeared and the successful but lonely life he led in her wake. The narrative then jumps to Emily Gibbings, a 78-year-old woman who in many ways feels alive for the first time. She’s just gotten engaged to Marcos Santos, an enigmatic man who recently moved to her assisted living facility. Even though her loved ones find this decision difficult to understand, Emily tries to explain how much she values the canasta games and the gentle touches they share. He has brought joy and intimacy back into her life, two things she thought she’d lost forever when she was violently assaulted as a young woman. He also tells her about the origin of his special card decks, a beautiful tale involving young lovers separated by a misunderstanding. Emily believes that their love is much simpler. But when she shows Marcos a photograph of herself before her assault, he reacts strangely, and she begins to feel a prickle of danger. Her best friend, Margaret, was a marriage counselor for many years, and she agrees that something seems suspicious. But when the two of them pry into his past, they’re unprepared for what they uncover. All the while, an obvious connection between Emanuel and Emily arises, but other less evident collisions also occur, including a cleverly threaded symbol of a bird that fails to escape when given the chance. Piroso’s writing offers plenty of lovely psychological insights, as when Emily imagines “witnessing how the best of herself slowly became a dry river, a dusty reminiscence of a mighty flow of sentiments.” Emily and Margaret’s friendship, humor, and fears of aging are deftly illustrated in a way that’s reminiscent of Joanna Cannon’s Three Things About Elsie. But this same attention to psychology at times encumbers the book, with some passages of overexplanation. In addition, exposition often arrives in the form of stilted dialogue. At one point, Emily recalls the first day she saw Marcos at the facility: “He did not do much, he just stood there—a few others were also looking at him. As you know, Margaret by her own choice has become a sort of ad hoc concierge for this place. Usually, she is the one that greets and introduces the novices to the rest of us.”

An eloquent but sometimes-clumsy look at the lingering legacies of the past.