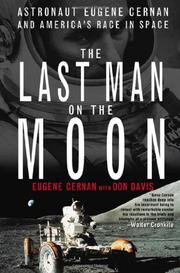 THE LAST MAN ON THE MOON

A hokey autobiography of American astronaut and moon-walker Cernan. Cernan commanded the last of the Apollo missions, number 17, destination Moon, where he and mission geologist Jack Schmitt took a walk. It was a long haul of a career to make those few steps—in all likelihood, a career exquisitely nuanced, serendipitous, and with a few tales to tell, but what gets served up here is Cernan the hayseed patriot. “The Cold War became the crucible in which my military career was forged” will tip readers off early as to where things are headed. Training in California, he experiences an earthquake and interprets it as “God’s way of saying, ‘Welcome to the real world, you nugget.’ “ Vietnam rages in the background, and Cernan makes note of it with such comments as, “the bloody battle of the Ia Drang Valley proved those little guys could fight us to a standstill.” He briefly hits a stride chronicling his space walk on an earlier mission—a truly hellacious, slow-motion episode, in which a welter of little glitches nearly kills him—and his profiles of the other pilots in the space program are easily the most entertaining parts of the book, although they too can be facile (of Walter Schirra, “He was a cold-nerved pilot, by God”). When he steps off the ladder of the lunar module and treads upon the surface of the Moon, he stays true to form—no poetry, just “Oh, my golly.” And questions of tone aside, there is too much lumber passing as prose in these pages (“Roger was a workaholic, and I guess we all were, but off-duty, he had a great sense of humor”), despite the assistance of amanuensis Daavis Even if Cernan is an aw-shucks kind of guy, this much corn makes his story a bland affair. (16 pages b&w photos, not seen) (Author tour)