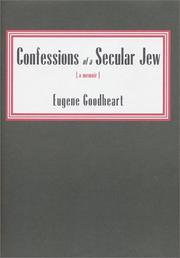 CONFESSIONS OF A SECULAR JEW

A literary critic reflects on his career in the elite circles of the academy, his tenuous connection to Jewish identity, and the vicissitudes of age.

Although Goodheart (Humanities/Brandeis) has little that is strikingly unique to say about his childhood (in a politically progressive family during the 1930s and ’40s) or his initiation into the intellectual scene of the 1950s, his account treats the usual themes—the gradual erosion of his identification with Judaism, as well as the drama of the “golden age” of Columbia University—with humor and some sensitivity. His memoir is most successful, in fact, as an account of a vanished academic world, in which bright young men could step almost effortlessly into more or less prestigious sinecures, and students, campus staff, and wives seemed to exist only to serve the scholars in their pursuit of their calling. He depicts the imperiousness of the prominent Formalist critics and the ironies of his own “conversion” from his family’s socialist idealism to the decidedly apolitical critical approaches then in vogue with some sensitivity. At the same time, casual references to relocating his (unnamed) wife as he climbed the career ladder from job to job are disconcerting, hinting at but never exploring the human cost of the professorial privilege that he enjoyed. A similar mix of self-consciousness and evasion pervades his discussion of a critic’s political obligations. “My mind swung between the poles of ‘on the one hand’ and ‘on the other,’ ” Goodheart confides, but the effect is less existential doubt than waffling. The philosophical ruminations that follow, pondering “the perils of no convictions” have the texture of a magazine article stretched to chapter length, offering broad generalizations about “people on the left,” conservatives, and postmodernists—but little analysis of specific positions or arguments. The last two chapters mourn the indignities of his own late middle age and his mother’s old age: physical deterioration, alienation, and loneliness.

Goodheart writes with disarming gentleness throughout, but his memoir is a forlorn reminder that the Great Books do not necessarily provide moral compasses or solace for the human condition.