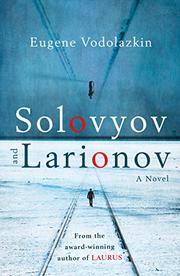 Solovyov is a young academic who grew up at Kilometer 715, a railroad stop so obscure that it wasn't even a backwater—call it a back-no-water. When he makes his way to St. Petersburg to begin an academic career, he's assigned as his thesis topic a legendary general named Larionov—a fierce defender of the old regime who somehow, after the Revolution, not only kept his life and liberty but thrived in the new Soviet Union, living out his days on the beach at Yalta with the benefit of a pension. To solve this mystery, the dogged Solovyov strikes out for Crimea, where he falls in the path and under the sway of the lovely Zoya, an employee at the Chekhov Museum whose mother was the general's attendant late in life. Zoya sweeps him into various intrigues and adventures as he tries to unearth the general's elusive diary. Eventually Solovyov achieves escape velocity from Zoya and leaves Yalta, first for an academic conference on the general and then, acting on information he receives there, back home at the nearly abandoned Kilometer 715. The pace lags occasionally, and the hundred kinds of complication can seem excessive or indulgent, but there is sprightly, funny satire here and, beneath it, a surprising vein of poignancy.

A busy but intriguing hybrid of a novel.