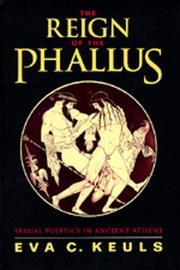 THE REIGN OF THE PHALLUS: Sexual Politics in Ancient Athens

A ""gallop through the iconography of glorified aggression"": a lively review that's a bit too fast and furious. Keuls (Classics, U. of Minnesota) writes very well in a popular vein, summarizing huge amounts of pictorial, literary, and historical material about the dreadful condition of women in Athens, particularly from 480 to 430 B.C. Athenian women had no political rights, got no formal education, were married very young in a virtual sales transaction, couldn't own property, were closely guarded at home, were often disdained by their husbands in favor of young boys or prostitutes, were belittled by misogynists from Hipponax to Aristotle--and found omnipresent reminders of their subjection in the phallic processions of the Greater Dionysia, the endless phallic jokes of Old Comedy, and the herms (statues of Hermes consisting of a head mounted on a post with a stylized erection). All this is bad enough, but Keuls makes things worse. She sees the whole city of Athens as divided into two antagonistic sexual spheres, ""enclosed inner spaces"" (the uterine prison of the women's quarters) and ""colonaded semi-open areas"" (the realm of phallic columns and male freedom). Marriage in Athens was horror pure and simple. But what about those tender, even heart-breaking funerary steles of young wives? ""The pious inference that monuments, even those erected by husbands, imply good marriages is to be rejected as wishful and naive."" What about the powerful feminist message in Alcestis or Hippolytus? Keuls ignores it. In a culminating flight of fancy she speculates that the famous mutilation of the herms in 415 B.C., on the eve of the Sicilian Expedition, was the work of female conspirators, free to roam the city during the festival of the Adonis. Keuls' imagination tends to run away with her, and she may mislead unsophisticated readers. But she's not a bitter ideologist; she's fair-minded and occasionally even funny. She's especially knowledgeable about vase-painting, but she draws on a wonderful variety of sources. A slightly wacky, but much-needed and quite stimulating, effort to demythologize ""the glory that was Greece.