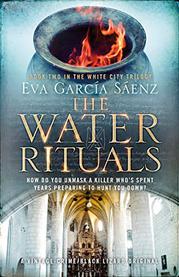 A righteous police inspector is propelled into examining his past while facing personal and professional challenges in the present.

In the Spanish city of Vitoria, Inspector Unai López de Ayala, known as Kraken, gets a double whammy from his lover and boss, Deputy Superintendent Alba Díaz de Salvatierra: She’s pregnant, and the father might not be him but her dead husband, Nancho, a serial killer. His pursuit of Nancho in The Silence of the White City (2020) left Kraken with serious head injuries that have impaired his ability to speak. Though he narrates in a gritty first person, he regularly visits a speech therapist and rarely talks to others, preferring to conduct conversations in the texts peppered throughout. A message from Kraken’s partner, Estíbaliz, brings more bad news: Kraken’s first girlfriend, graphic novelist Ana Belén Liaño, has been murdered. Intermittent flashbacks to 1992 present their idyllic teen romance and provide an intriguing counterpoint to the main noir narrative. Sáenz’s large, boldly painted canvas includes a plague of inexplicable suicides by young women. Kraken’s collaboration with his own group of colorful irregulars—hacker extraordinaire Golden Girl; Tasio Ortiz de Zárate, long imprisoned as a serial killer but exonerated; street-wise skater MatuSalem; and others—is this story’s most enjoyable feature. The murder of one of Kraken’s old friends indicates both that he’s dealing with a serial killer and that he might be the killer’s focus.