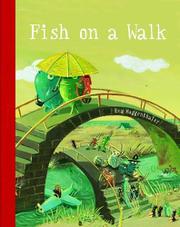 FISH ON A WALK

A German surrealist debuts on this side of the Atlantic with a set of independent scenes that will give wings to flights of imagination.

Small figures of dressed animals, animated mushrooms and the occasional gnome stroll or scuttle through indoor and outdoor settings over word pairings that are sometimes opposites and other times not (quite): “Scared – Brave,” “Cranky – Kind,” “Tricky – Truthful.” A teeter-totter with an elephant on one end and a wobbly-looking pyramid of smaller creatures on the other illustrates alone/together; a “Brave” frog guitarist serenades an audience of attentive veggies while a “Scared” bunny cellist suffers an attack of stage fright; a table of monkeys going “Wild” in a restaurant as a family of “Polite” pigs studiously looks away. These central scenarios can be seen in a glance, but further examination reveals smaller and often more ambiguous side business that, properly, invites questions (Why do those ants have shopping bags? Is that a shark’s fin in that puddle of spilled soda?) and speculative answers. Though Muggenthaler’s art, painted with small strokes and daubs of muddy, generally low-contrast colors, is subdued, her lively imagination and tongue-in-cheek sense of humor provide a redemptive shine.