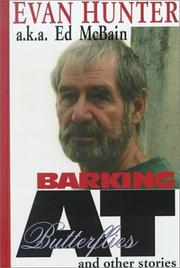 A varied but disappointing collection by one of our crime fiction icons. The 11 reprints aren’t exactly bad, but they lack the snap, the sense of mastery that makes McBain’s 87th Precinct novels, for instance, work so well. It might be that the author (a.k.a. Evan Hunter) needs room—that his characters have to hold the stage for a while in order to become quirky enough, or heroic enough, or poignant enough to drive a plot. Only in “The Movie Star,” the best piece by far, does any of that happen. A young woman who looks somewhat like Kim Novak begins to refashion herself as Kim Novak—first playfully, then obsessively. Calamity is inevitable, but McBain makes the trip to the graveyard mordantly entertaining. Elsewhere, plot devices masquerade as characters. The title story concerns an implausible husband absurdly jealous of his wife's dog. His attempt to murder the animal goes wrong in a way that will surprise few and annoy others. The theater types in “The Beheading” lost their freshness decades ago. In his introduction, McBain tells us that his children's camp story—the pat, slick “Uncle Jimbo's Marbles”—appeared first in Redbook, and that “Motel”—a tedious riff on the joylessness of illicit love—picked up its latest rejection slip as recently as 1999. Both times you can see why.

Mostly misfires, but the prodigious author of 90-plus novels (The Last Dance, 1999, etc.) has been on target so often throughout a marvelous career that his reputation is virtually bulletproof.