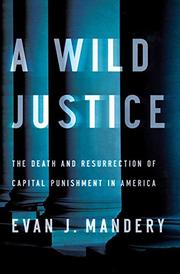 The Death and Resurrection of Capital Punishment in America

When the Supreme Court declined to accept the appeal of a 1963 rape case, Justice Arthur Goldberg published an unusual dissent questioning the constitutionality of the death penalty. From this small beginning, Mandery (John Jay College of Criminal Justice; Q: A Novel, 2011, etc.) skillfully traces the building momentum within the country and the court to question the legality of a punishment the Founding Fathers took for granted.

Indeed, by 1972, in Furman v. Georgia, the court struck down death penalty statutes so similar to those in 40 other states that executions nationwide came to a halt. Disagreement among Furman’s 5-4 majority—was the death penalty “cruel and unusual” punishment under the Eighth Amendment, or was its arbitrary application a violation under the 14th?—and a forceful dissent hinted at a blueprint for states to rewrite their capital-sentencing schemes. By 1976, 35 had done so. In Gregg v. Georgia and its companion cases, the court approved the revised statutes, opening the door to 1,300 state-sponsored executions since. Relying on interviews with law clerks and attorneys, information from economists, criminologists and social scientists, arguments from political and legal scholars, a thorough knowledge of all applicable cases and sure-handed storytelling, Mandery focuses on the strategies of the Legal Defense Fund, the remarkable attorneys who led the charge for abolition, to cover virtually every dimension of the capital punishment debate. The author is especially strong on the individual backgrounds, personalities and judicial philosophies of the justices, the shifting alliances among them and the frustrating contingencies upon which momentous decisions sometimes turn. Even those weary of this topic will be riveted by his insider information about towering figures, lawyers and judges.

Outstanding in every respect.