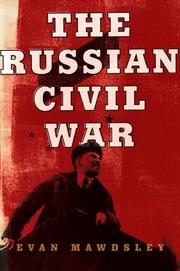 Hands up: Who knew that American forces once invaded Russia?

The Russian Civil War, writes Mawdsley (Modern History/Glasgow Univ.; Thunder in the East: The Nazi-Soviet War, 1941–1945, 2006, etc.), began just as soon as the Russian Revolution did. Lenin’s Bolsheviks moved swiftly to consolidate power, repressing the socialists who dominated the nation as a whole but who were weak in the industrial cities. At the same time, Cossacks, monarchists, cadets and other foes of the new regime took up arms, while “the civilian opponents of the Bolsheviks, people of the moderate Left and Right, lacked effective combat forces of their own and played no parts.” The contending extremist armies, Red and White, would be locked in war for the next three years, with units from the British, American and French armies appearing on various fronts to battle the Bolshevik forces. The state established a program of what the regime called “War Communism,” taking emergency measures that in some cases turned out to be permanent. Radical policies of appropriation and state monopoly, backed by a powerful army, “helped the Bolsheviks to take power,” writes Mawdsley, even if “as the months passed . . . the political benefits came to look more dubious” as productivity plummeted and food shortages gripped the nation—driving many farmers, in the bargain, into the anticommunist camp. The Whites soon began to lose the fight, however, routed at places such as Tsaritsyn, a city on the Volga that would be renamed Stalingrad. Mawdsley attributes the loss to many factors, from being outnumbered and outgunned to the staggering incompetence of many White generals and the lack of central coordination among the anti-Bolshevik forces. Sporadic fighting continued until 1922 in Siberia, carried out by figures such as the Baron Ungern-Sternberg, “an unbalanced Baltic nobleman . . . already notorious for his atrocities in Transbaikal.” After that time, though, Soviet domination was complete and would endure for another seven decades.

A well-rendered account of a history too little known in the West.