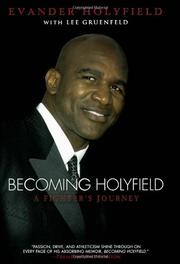 by Evander Holyfield with Lee Gruenfeld

It’s not easy being champion, declares Holyfield, who has been heavyweight champ four times and held the undisputed cruiserweight title for years.

He started winning at the age of eight—more than a decade before he first met his father. After Golden Gloves contests, wins at the 1983 Pan American Games and a controversial bronze medal at the 1984 Olympics (he missed out on the gold due to a contested disqualification), “The Real Deal,” as he was dubbed, turned pro as a cruiserweight. Soon he bulked up enough to become one of smallest heavyweights in the business, always going for a knockout, the outcome that can never be argued. He was, and is, a professional, hardworking athlete, savvy and cool in the ring, frequently withstanding punishing pain. Holyfield assigns due credit to his people and blames only himself for losses. He even concedes that his 1999 fight with Lennox Lewis, which ended in a draw, could well have gone to the other guy. Presented with the aid of novelist and sportswriter Gruenfeld (The Street, 2001, etc.), the boxer’s memoir covers his born-again religion, his family, marital and extramarital encounters, childrearing, business practices, money and a misdiagnosed heart defect. The book’s main interest lies in Holyfield’s take on such memorable encounters as the Fan Man Fight, interrupted by a parachutist in the ring, or the Bite Fight, in which he lent a bit of an ear to Iron Mike Tyson. Boxing fans will especially relish his appraisal of such formidable opponents as Riddick Bowe, Larry Holmes, Lennox Lewis and George Foreman as well as Tyson. Holyfield’s ticket to fight in New York has been revoked, with allegedly “diminishing skills” cited as the reason. Now 45, ignoring well-meaning pleas for his retirement, the old Warrior continues to box. It’s his call, he says.

Not quite a KO, but an engaging story of a fighter that wins on points.