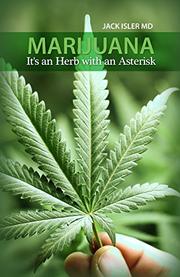 It's an Herb with an Asterisk
by Jack Isler
BUY NOW FROM
AMAZON
BARNES & NOBLE
LOCAL BOOKSELLER
GET WEEKLY BOOK RECOMMENDATIONS:

A former ICU physician discusses the positive and negative aspects of marijuana in this work of nonfiction.

Even as marijuana becomes increasingly legal in states across the country, many basic facts about the plant remain unfamiliar to people on both sides of the debate. Isler (21 Broken Bones, 2016), who has four decades of experience using marijuana for both medical and recreational purposes, believes the plant has much to offer society. His ultimate goal with this book is to have the Food and Drug Administration stop treating marijuana as a Schedule I drug and return it to its earlier categorization as an herb. “To get the FDA to change the status of marijuana, millions of knowledgeable people will need to inundate them with messages of change,” he writes. “After you read this book, you should be able to make an intelligent decision about using marijuana for medical or recreation purposes.” Isler then explains, in detail, the biological and chemical makeup of the plant, the way it interacts with the human body, the methods to ingest it, and the ways in which it can aid in the treatment of various diseases and conditions. For the sake of transparency, Isler includes the circumstances in which pot can prove a health risk: for example, “Children of mothers who used marijuana during pregnancy are prone to having lower functioning skills, attention deficits, and increased conduct and behavior problems.” These dangers are rather few and specific, however, and the author expresses confidence that they will be more than outweighed by the drug’s medical potential. Isler’s prose is direct and simple without forsaking the science that underlies his arguments. Even longtime advocates of the drug will likely learn a thing or two about their favorite plant (for example, the subspecies sativa and indica are actually misidentified—what is widely known as sativa is actually C. indica, while indica is something called C. afghanica). One of pot’s intriguing qualities may surprise cigarette smokers: “Marijuana has four-times the amount of tar in a regular cigarette, but it does not cause lung cancer. It is hypothesized that the cannabinoids are protective.” While the pro-marijuana faction already seems to be winning the dispute, this short work provides quick access to the science that may help persuade some of the holdouts.

A comprehensive and chemistry-based argument for the medical application of pot.