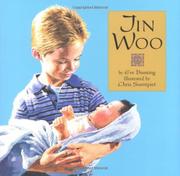 Among the prolific Bunting’s many talents is a propensity for distilling complex social issues into accessible picture books that begin to make subjects such as the Vietnam Veterans Memorial, adult illiteracy, and homelessness more understandable to younger children. This picture-book exploration of the arrival of an adopted Korean baby named Jin Woo is the second collaboration by Bunting and Soentpiet (So Far From the Sea, 1998), and as a Korean adoptee himself, the talented Soentpiet is particularly well-qualified to illustrate this one. Jin Woo’s story is told in the present tense from the viewpoint of the baby’s older brother, a six- or seven-year-old named David, who is also adopted. He is alternately sad, hopeful, unbelieving, and excited at this change in his life, which is an accurate portrayal of the whirlwind of feelings that surround any new big brother. David’s parents are understandably thrilled, with their joyous emotions captured in both Bunting’s text and in Soentpiet’s detailed, realistic paintings. His large-format illustrations are the book’s main strength, surpassing Bunting’s serviceable story, which is not as compelling as some of her other picture book texts. There are some wonderful recent books on inter-country adoption (notably Rose A. Lewis’s I Love You Like Crazy Cakes, 2000), but very few that focus on the mixed feelings of older siblings. This will find a ready audience with many adoptive families, especially those preparing to adopt Asian babies. (Picture book. 4-8)