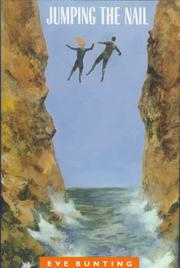 Impelled by a heady blend of peer pressure and vainglory, a group of recently graduated California teens revive the local stunt of leaping from a 90-foot cliff into the sea where some of their predecessors died. Skillfully, Bunting homes in on the dynamics of daredevil behavior, omitting such trappings of teen rebellion as alcohol, drugs, or problem parents. Conscientious Dru, her narrator, is about to be a scholarship student at Northwestern; Dru's new boyfriend, Mike, is rich but very nice. Dru's anxiety especially concerns her close friend Elisa, whose mental health she knows is fragile. Elisa's charismatic but boorishly insensitive boyfriend, Scooter, cajoles Elisa into joining him in the first jump. Afraid to lore him, Elisa complies; Though neither is physically hurt, the effect on Elisa is traumatic. Next, driven by the growing exhilaration plus competition over Mike's sexy former girlfriend, twin boys jump, surviving with minor injuries but adding to the tension—to which Elisa tragically succumbs before Mike and Dru are able to carry out their difficult resolution to inform the police. Satisfying suspense that unobtrusively incorporates wholesome values while drawing a credible picture of ordinary teens enthralled by their own escalating frenzy. (Fiction. 12-17)