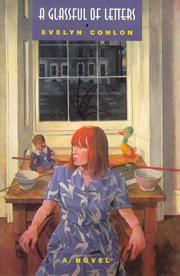 A GLASSFUL OF LETTERS

Friendship, fear, and exile inform this latest from Irish novelist and storywriter Conlon (Taking Scarlet as a Real Colour, not reviewed), a brilliant epistolary work suffusing a portrait of modern Dublin with the subtle wit of Clarissa. Helena, like most stewardesses, is good at observing things from a distance.”This story is not about me,” she admits at the start. “It’s about my neighbour, Connie, and other neighbours, and what happened to her and us one year. She was brave.” Connie, you see, is married to Desmond, a Dublin art teacher. She has several children whom she loves, but she’s neither particularly happy with her lot nor desperate enough to change it. One great sorrow is her loss of her friend Fergal, who’s moved to New York to find work as an architect. Fergal corresponds with Connie and Helena both, although Helena (accustomed to long periods on the road with Aer Lingus) is a much better gossipmeister, filling Fergal in on the Dublin scene. From Helena, for example, Fergal learns that Desmond’s rather aloof father Bernard, a bibliophile and manager of the Waterford Glass factory, has begun corresponding with prisoners as a kind of charitable hobby. Connie, bored to death and inspired by her father-in-law’s example, follows suit and begins to exchange letters with Senan, an IRA convict. Fergal learns, to his horror, that Connie has become infatuated with Senan and that Senan has actually been released from the slammer. What will become of Connie’s marriage? Or her friendship with IRA opponent Fergal? For that matter, what will become of Ireland? And how can Helena and her husband Kevin be so blasÇ about everything? To Fergal, it seems that his countrymen have gone daft, though in fact a larger process is at work in the society he left behind. A splendid reworking of the standard circle-of-friends saga, and a timely and fascinating glimpse of 1990s Ireland.