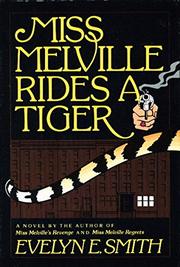 A fourth outing for 50-ish Susan Melville (Miss Melville Regrets, etc.)—painter, heiress, respected member of old-line society, and ex-hired-gun. Now affluent, Melville kills only when the spirit moves, which it does when she discovers that old enemy Berry Rundle has been, for decades, the Begum of Gandistan, the world's largest producer of opium poppies, and is the power behind the throne of her son, American-educated King Serwar. Begum and son are visiting New York—the Begum's true identity still literally under wraps—supposedly in connection with Rundle House, a charity supporting unwed mothers whose board of trustees is suddenly awash with the names of big-league mobsters. The Begum lets Melville know that she has her own hit list and Melville is numero uno—a revelation that leads to a high-noon chase and shoot-out in Bloomingdale's. Miss Melville has become a played-out, charmless bore, in a story silly beyond words.