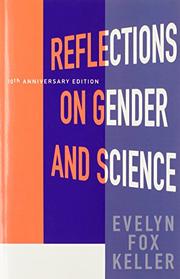 REFLECTIONS ON GENDER AND SCIENCE

A ""psychosociology of scientific knowledge."" In essays ranging from Plato through developmental psychology, Keller (Mathematics and Humanities, Northeastern) questions the gender assumptions usually hidden behind accepted understandings of the scientific method and the behavior of scientists themselves. One approach is through language: while the sexual imagery of Plato's dialogues allows him to ""map out a path to knowledge guided by love, and insulated from the aggression both he and his culture associate with sensible, material, and female nature,"" Bacon's view of science is more that of a conquest of (male) mind over (female) nature. And, while Bacon allowed a part for God in his description of science, the modern scientist has assumed the procreative function for himself: ""his mind is now a single entity, both phallus and womb."" Evidence comes in part from an object-relations approach to personal development, heavily influenced by Nancy Chodorow's The Reproduction Of Mothering and other feminist writings. In ""Gender and Science"" Keller traces the development of objectivity in childhood and the difficult task of reintroducing ambiguity: ""Emotional maturity. . . requires a sufficiently secure sense of autonomy to allow for that vital element of ambiguity at the interface between subject and object ."" Constrastingly, scientists speak of a wish to ""master"" nature, even to ""storm her strongholds and castles,"" To Keller: ""The contest many scientists feel themselves engaged in, either with nature as a whole or with the particular objects they study, reflects the contest they feel themselves engaged in with human others."" The emphasis on overpowering nature may have its costs. In two separate essays Keller questions the scientific community's rapid, uncritical acceptance of the idea of one dominant ""pacemaker"" cell (initially detected in cellular slime mold) and, secondly, its resistance to any philosophic attempts to understand the adequacy of quantum mechanics as a representation of reality. The final essay, on Nobel prizewinning geneticist Barbara McClintock (subject of a Keller biography), suggests a different approach. ""To McClintock, science has a different goal, not prediction per se, but understanding: not the power to manipulate, but the empowerment [that]. . . results from an understanding of the world around us, that simultaneously reflects and affirms our connection to that world."" Provocative arguments, presented with authority.