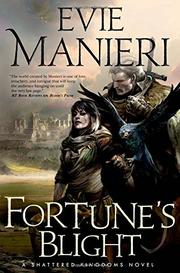 The enslaved Shadari have thrown off their Norlander overlords, but their king, Daryan, still faces many problems; most urgently, somebody’s murdering anyone with magic powers. Meanwhile, Emperor Gannon of Norland, who won the crown by trial of combat, intends to make himself invincible by recovering the bronze sword named Valour’s Storm from an ancient tomb buried deep in the earth. However, the Norlanders have absolute faith in their holy book, which insists that they cast out anybody who becomes crippled or handicapped or damaged—and, if the deep places are violated, Valrig, the god of the cursed, will rise up with an army of the banished and destroy them. Jachad, King of the Nomas, who can summon fire, survives an attack by the mysterious assassin, but clearly he’s been poisoned, realizes Isa, a high-ranking Norlander who wants to help the Shadari. She will need the help of her sister, the fearsome rebel leader Lahlil, to learn who’s responsible. And the only way to save Jachad may be to take him to Norland—which will mean challenging Gannon. In Norland, meanwhile, Ani, a captive Shadari wizard, schemes furiously behind the scenes. Pieces of the backdrop, unfortunately, don’t fit, and the plot doesn’t add up. After a slow, talky start, the action’s once again physically improbable. The characters, whose relationships are more complicated than the plot and more difficult to decipher, alternate between soporific chat and impassioned outbursts. Like the first volume, then, self-indulgent and overcomplicated but inventive and occasionally showing real depth

Fans of the first volume should find it absorbing and rewarding enough.